A productive week and lots of help! :D

This week was super productive! 41.75 person-hours is a pretty good week! We assembled so much!

We prepared and primed the rear wing spars and the rib 1 assembly! 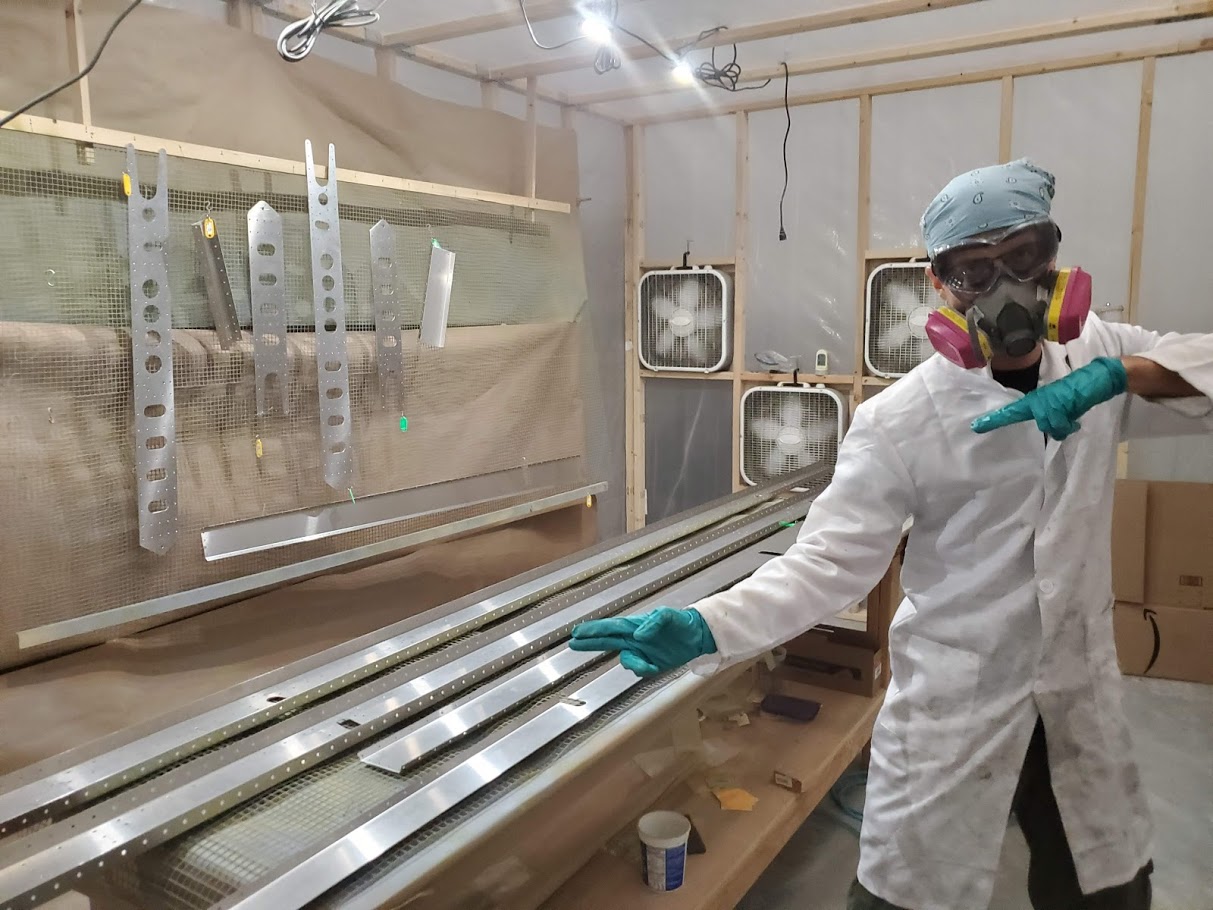 Peter and I then put the rivets in backwards on the rear wing spar! Kat put some of the rivets in, but was operating under our direction, so I can’t really blame her. 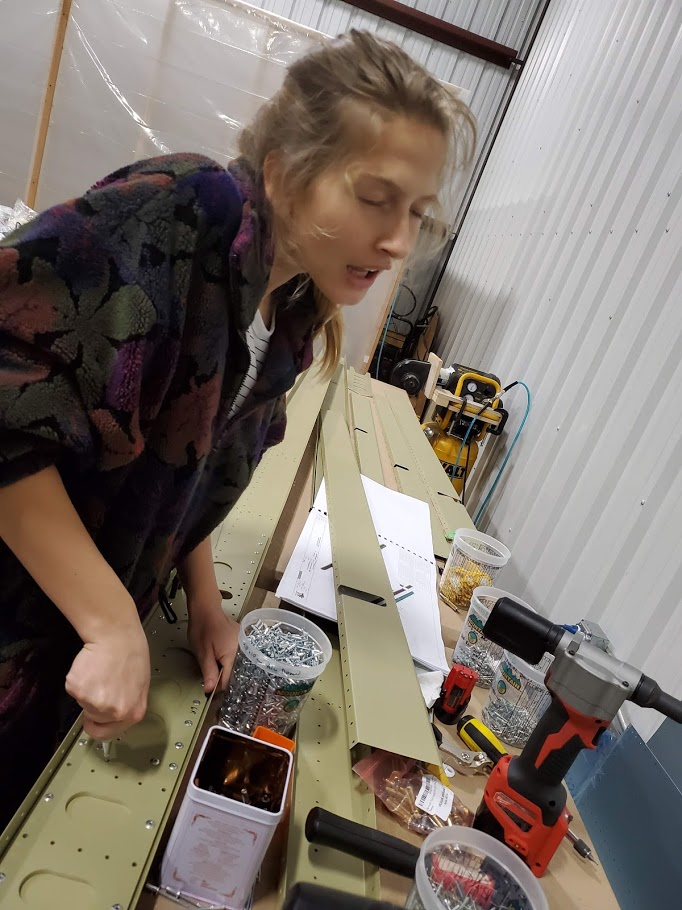 Claude showed us his super-nifty de-riveting tool which helps control the depth of your drill bit. This tool is especially handy for those super annoying 4.8 mm rivets that have a steel mandrel that make your drill slide off. He helped us a lot in a grand assembly and de-assembly session, cleaning up the rear wing-spar assembly. Peter and Claude spent the better part of two hours just getting the incorrectly-rivetted rivets off. Thanks Claude! 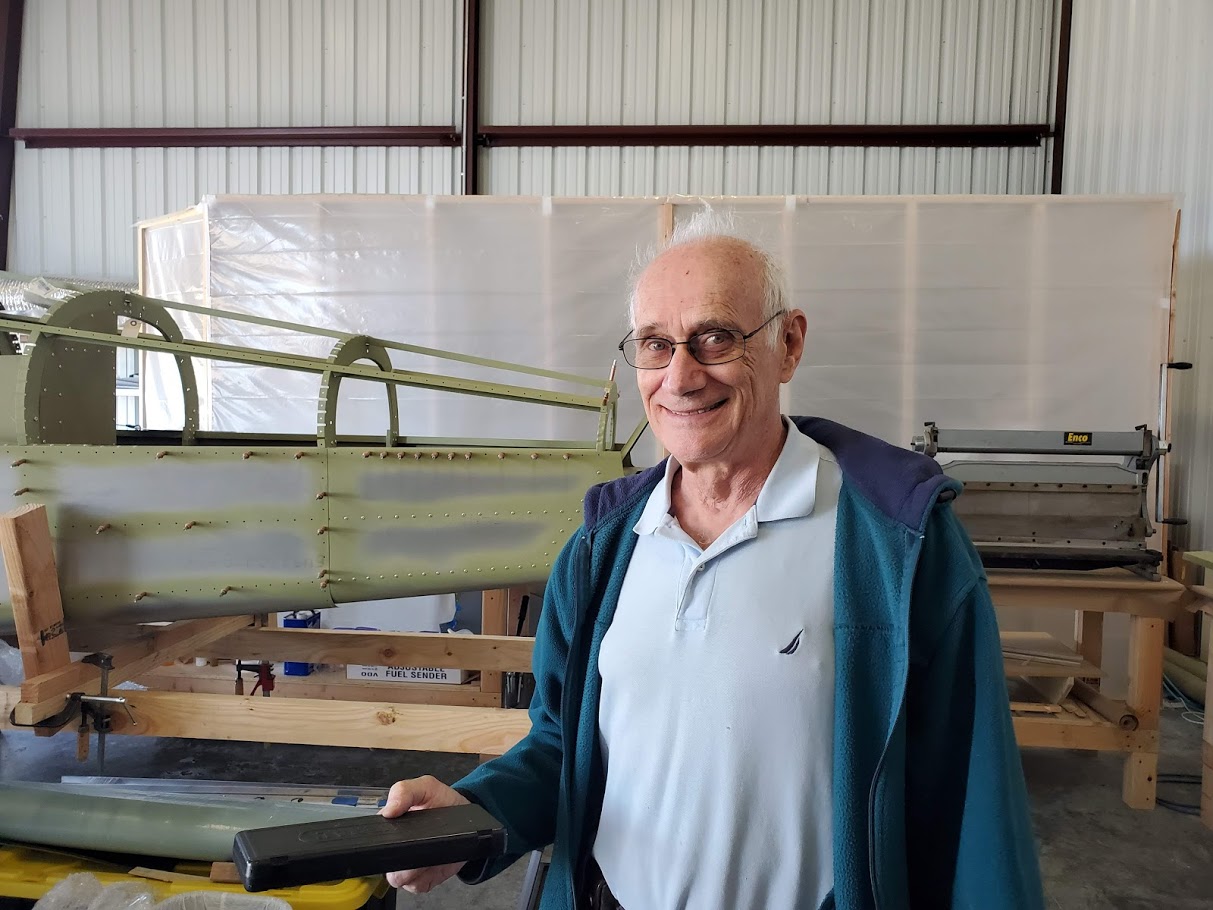 On a happier/more successful note, we had two successful firsts this week: Kat was able to assemble her very first assembly (wing rib 1, with Claude’s supervision) :) 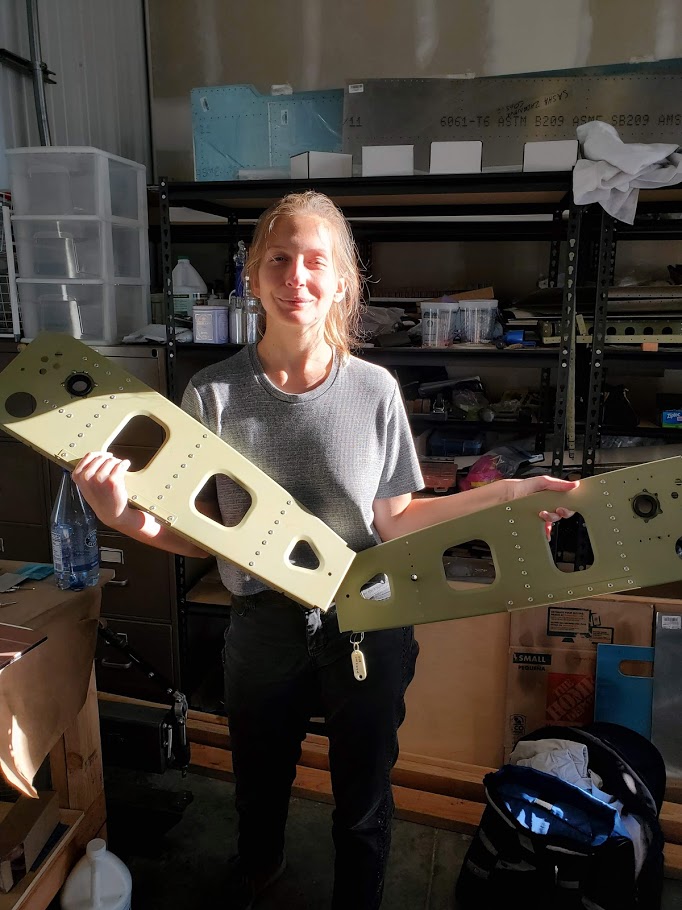 and our friend Bryan came by and put the rear wing spar assembly together (with the rivets in the correct direction!), his very first assembly! 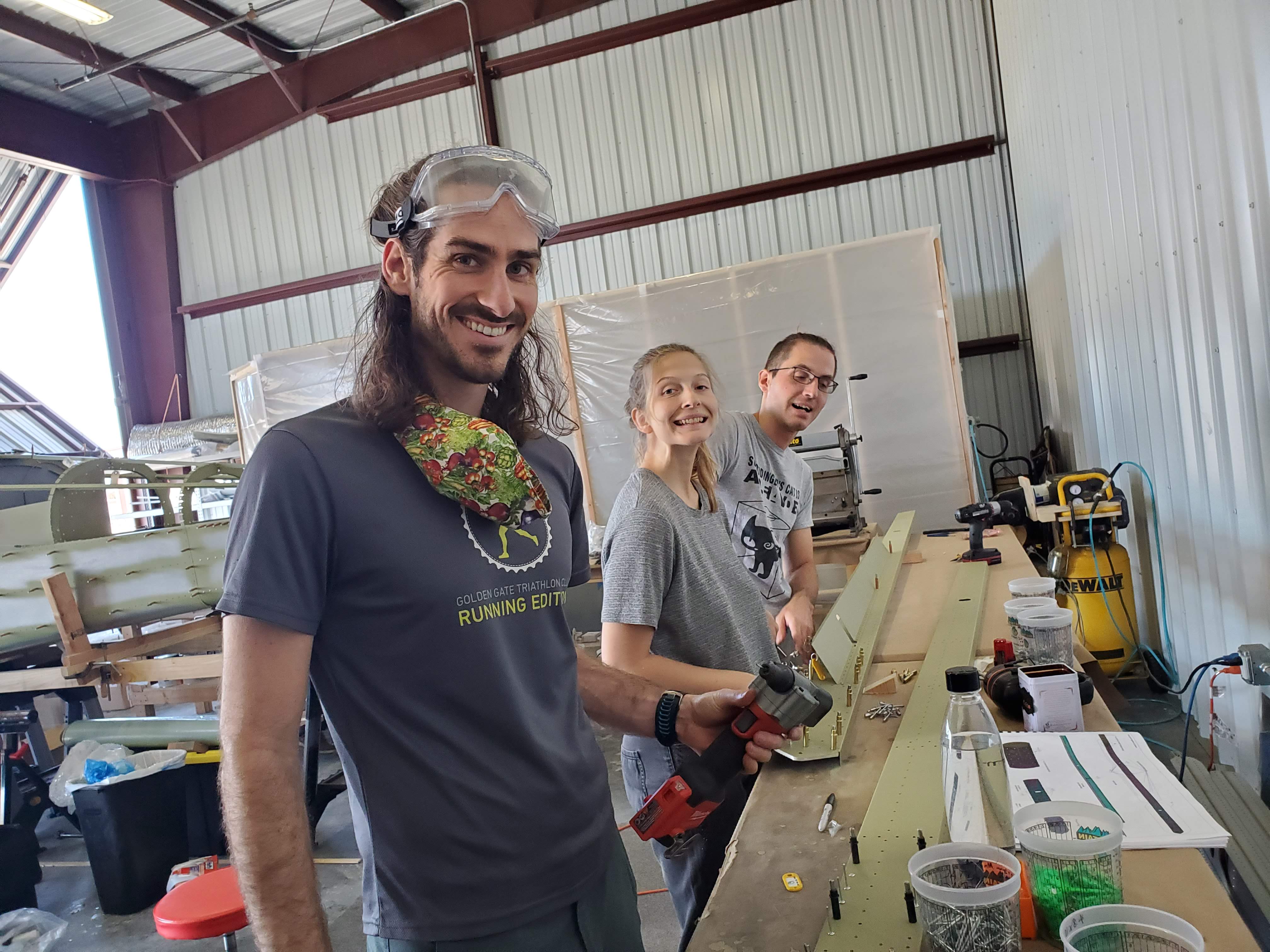 To round out this week’s team, Zina (my nine-year-old sister) came by and did her fair share of productive work: 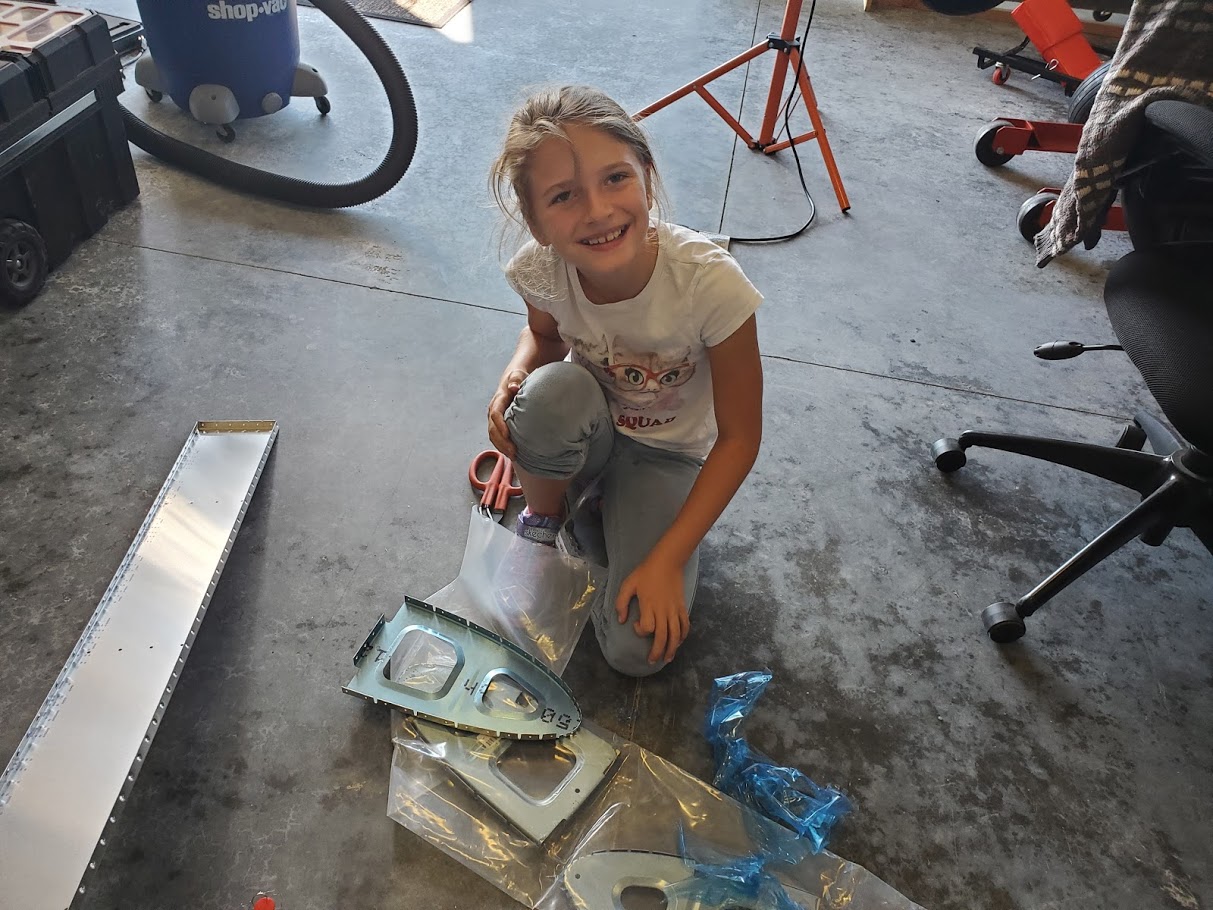 She greatly enjoys unpacking parts and applying labels, helping tremendously in our efforts to keep things organized. She also pronounces “rivets” as “ribbets”. With our hangar door open, we actually had really good air ventilation and were able to keep everyone more or less socially distant.

This week, we also did a fair amount of shopping for the empennage so that we can finally close up the skins on the vertical stabilizer and elevator. We bought the trim tab servo RAC T2-7A, the clevis/pushrods for it, a Rami AV-520 VOR antenna (going with Philip Rueker’s flow), a fancy strobe light (not content with the Aveo lights and their lack of candela-ness, we’re doing the Aeroleds Suntail), and several other electrical doo-dads (to quote another ME friend).

Since we’re going to have connect a bunch of wires together anyway, we decided to go with fancy Deutsch connectors (on the recommendation of the Sling Builders FB group) instead of soldering everything together for greater flexibility in debugging electrical mysteries (of which I’m sure there will be many). We also took a hint from this handy video and bought an antenna analyzer off Amazon to make sure we’re building our coaxes correctly and don’t do something stupid like break the antenna.

Bryan is looking to join the ranks of airplane-building adventurers and is open to kit suggestions. So, Sling-builders - do you regret your choice of kit or are you happy? Non-Sling builders, does this blog tempt or horrify you? How was your long weekend? Leave a comment below!