On the subject of priming

Dear readers, this post will be on that most contentious of subjects: priming.

Now, I (Sasha) have to admit that I’m really biased towards priming every square inch of every available plane part, probably mostly due to the fact that I work in the field of failure analysis. I’ve seen first-hand what corrosion can do to anything from keyboards to metallic hips to pipes, even to things that are supposed to be “corrosion resistant”. That stuff is very bad. Corrosion resistant aluminum can still corrode. Just because the Sling is made out of 6061 aluminum and Van’s is made out of 2024 aluminum and so they should be a lot more worried than we are doesn’t mean we shouldn’t worry.

I also found the map in this advisory circular to be super helpful. The Bay Area is considered to be a moderately corrosive area, but someday we’d like to move to Hawaii and take our plane with us, in which case we will be exposed to the severely corrosive area and having a super-well-primed airplane will give us lots of peace of mind.

Lastly, the extra weight doesn’t trouble me because I test-flew the Sling TSi at the Airplane Factory. That beauty had absolutely no issues exceeding its maximum structural true air-speed even in straight-and-level, leading me to believe that a few pounds isn’t going to make a huge difference in speed capability (since its not the airframe weight that’s the limiting factor anyway). So, let’s discuss primer.

The Van’s forums provide a wealth of information about this stuff. Our goal here is to try to consolidate some of the information, but if you’d like to know more details, that’s the place to go.

a) Self-etching (e.g. Rustoluem, Zinc Chromate, Variprime), where a separate sealing step is typically recommended (see here for a relevant discussion), and…

Again, as far as we could tell, two-part epoxy is considered generally to be the “gold standard” for corrosion protection. Most commercial aircraft manufacturers prime with two-part epoxy, Van’s air people can’t get enough of it (see yet another VAF thread), etc. Largely, we think this is because two-part epoxy can be/is generally resistant to solvents (i.e. fuel, MEK, etc.) while self-etching primer is not, making epoxy more durable in the long run.

Since we’re all about durability and/or accident-risk reduction on this blog, we went with the two-part epoxy primer.

Once this was decided, we spent some time shopping around and reading lots of data-sheets. We learned that in either a) or b) above, painting with a top-coat is recommended within an hour or two of priming (in order to avoid having to scuff/sand the primed surface later). Most data-sheets for two-part epoxy recommend applying a top coat even for interior parts, which led us to try to find a primer that doesn’t (i.e. that guarantees that it provides the needed corrosion protection as-is). This led us to two separate primers for the inside parts and outside parts:

a) Akzo interior primer (link here) for the inside, and

b) Sherwin Williams AcryGlo (link here) primer and top-coat for the outside. So, we’re committed to white as the base-color for our future airplane :) 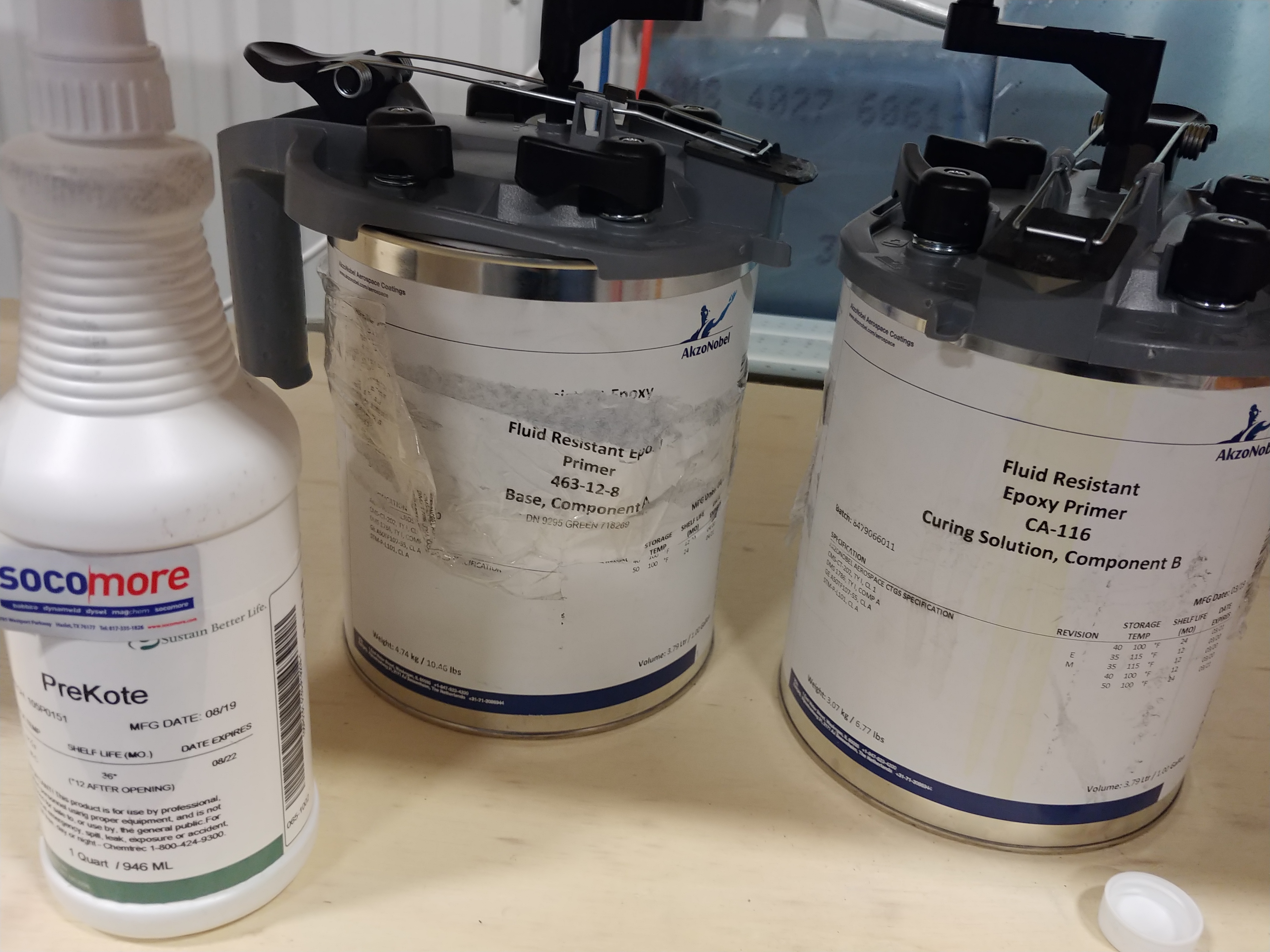 In either case, some type of surface pretreatment is essential for two-part epoxy to emulate the “etching” part of the self-etching primers, so we’ll use PreKote (link here) for the pretreatment. In summary, Peter and I are probably over-thinking this, but what we really wanted was to do everything we could per manufacturer’s recommendations (they are the experts, after all) while protecting our plane.

Now, it’s just a matter of successfully spraying/applying it (spoiler alert, there are struggles). Stay tuned, readers and tell us about your thoughts below. Is corrosion even real or is it the boogeyman? What’s your game-plan for painting? We welcome the controversy!