Merry Christmas dear readers! Since our last blog post, our rear fuselage started looking like a part of a real plane!

For the most of the month, we were doing the (arguably) boring work of preparing and priming rear fuselage parts, with few impressive things to show for our work but a growing pile of vomit-green parts (and green napkins we used to clean the paint gun in the trash bin). However, eventually we managed to prime all the RF parts, and could start building. With a little help from our friends Alexia and Simon we put together all this in one evening! 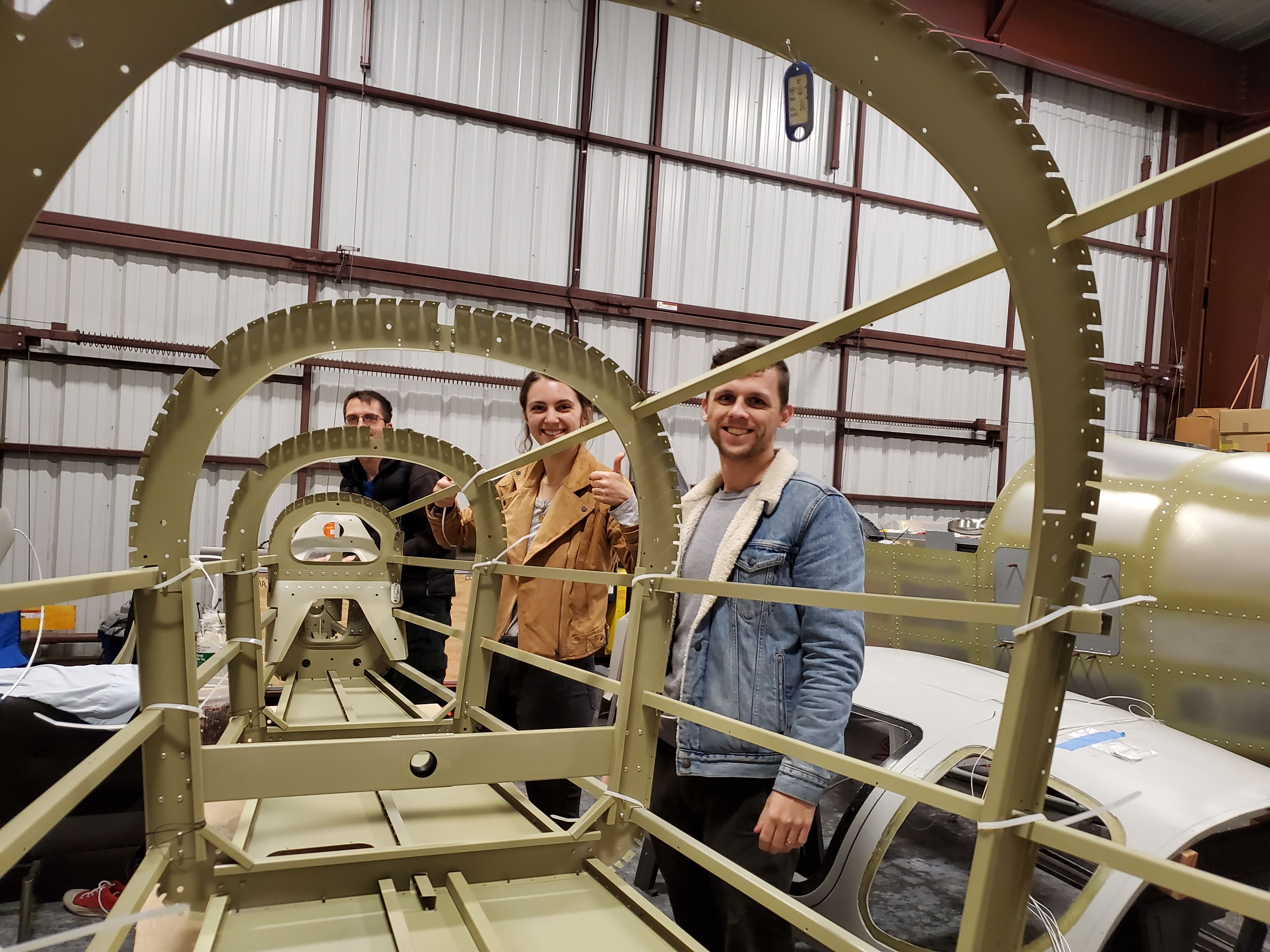 In the process, we also discovered more shortcomings of the manual. Specifically, in the “Longeron 8 assembly” step: 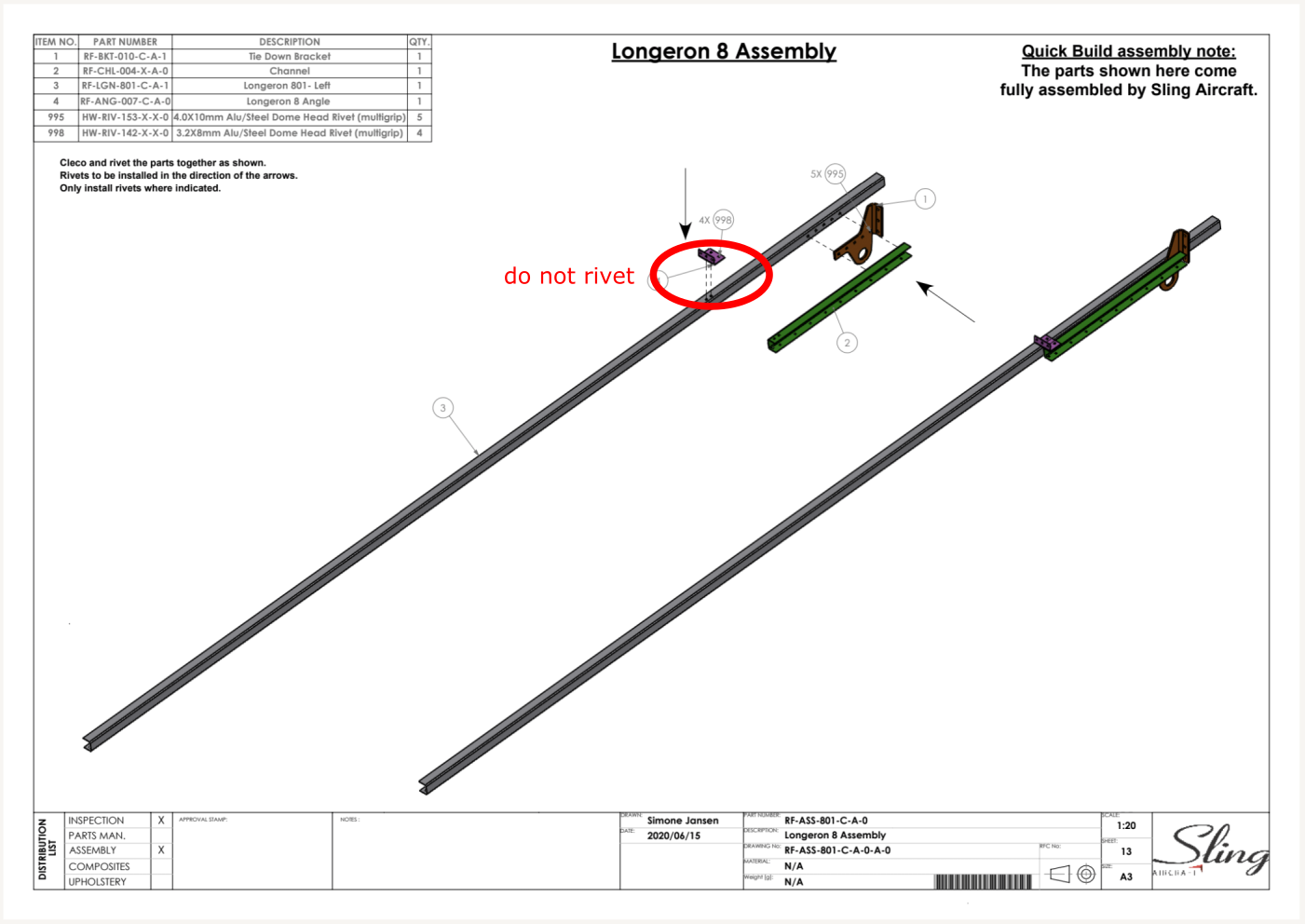 the angle bracket (circled in red) should not be riveted yet, because otherwise in the “Fitment of Lower Longerons” step:

it is impossible to install the rear rib assembly (part 1), as it has to be in front of said bracket, like this:

Another mistake we found is that in “Rear Fuselage Rib 3” step the following rivets should not be installed: 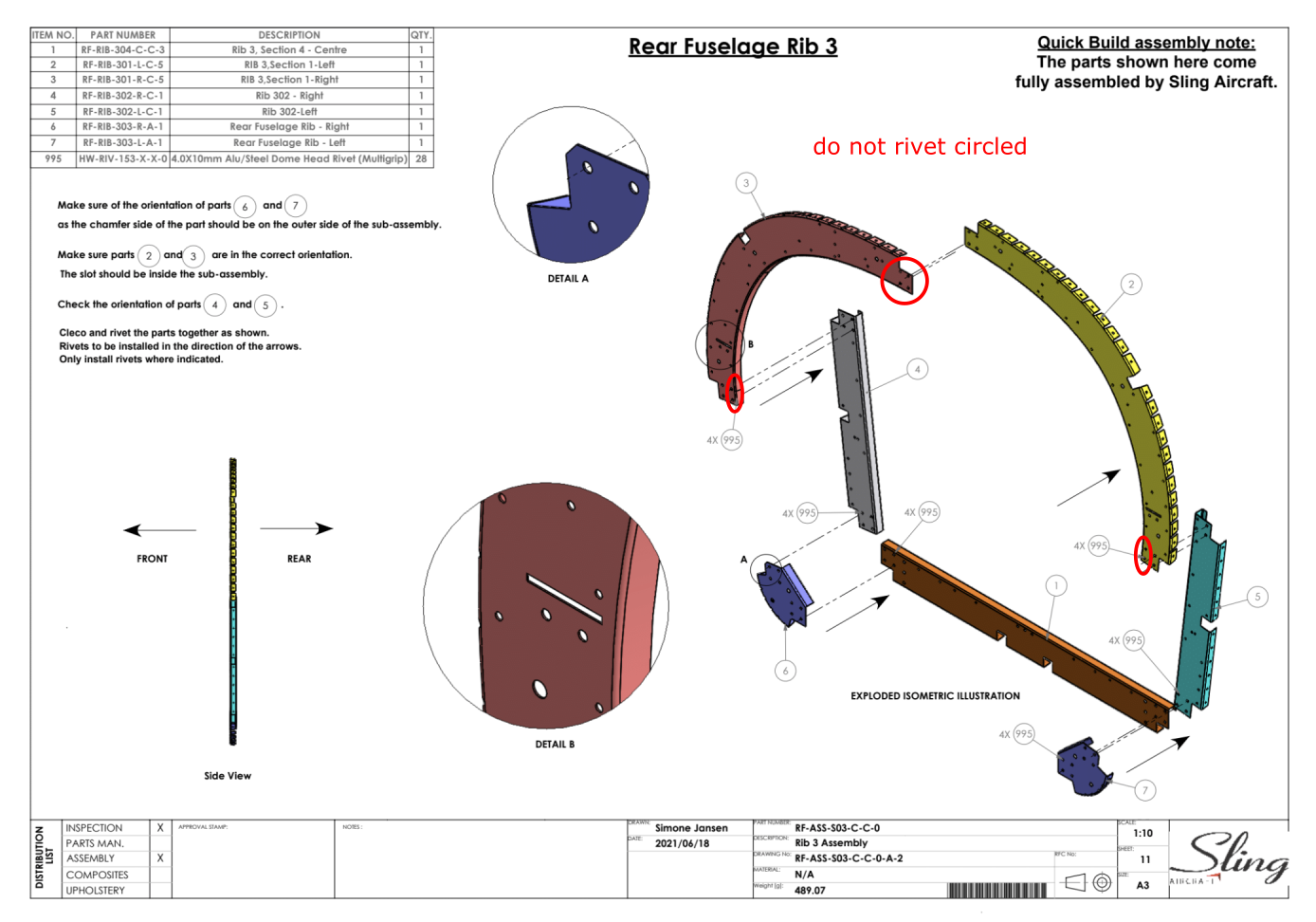 For the top 2 rivets (those are marked not to be riveted in the latest version of the manual, actually, and Claude warned us about it), the rationale is that’s where antenna plate support brackets attach later. For the rest (which are not marked “not riveted in the manual) - that’s where luggage bulkhead skin will be attached:

Naturally, Sling Factory was not the only one messing up - on the first try we managed to install rib 3 backwards:

Note how flanges are facing toward the front here, whereas they should be facing towards the rear, as can be seen at a closer look at the “Lower Longeron Fitment” schematic. We only discovered the mistake as, together with Teja, we tried attaching step support: 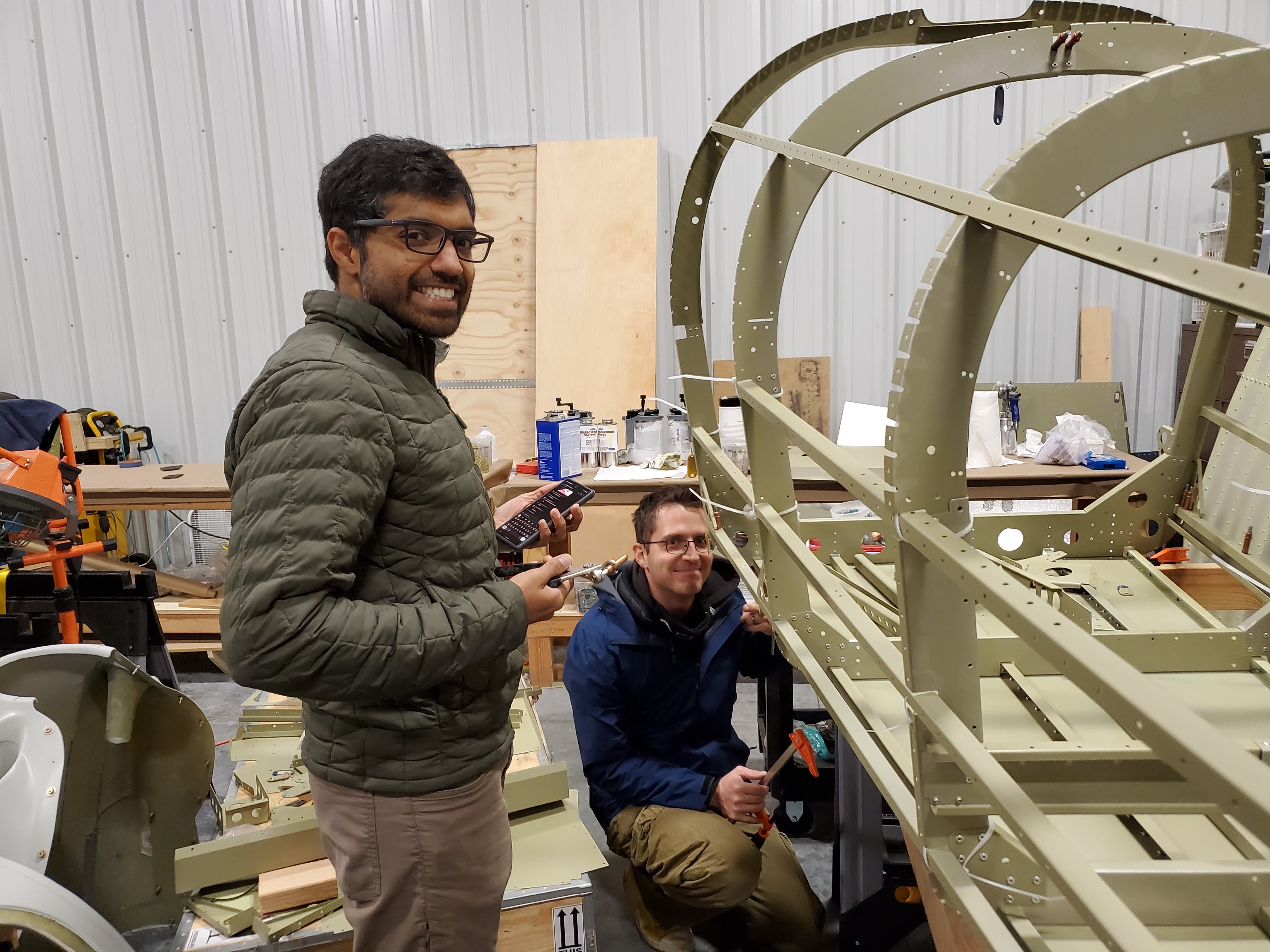 An interesting quirk of the step support fitment is that there are 4 very similar triangular parts (8,9,10,11, circled): 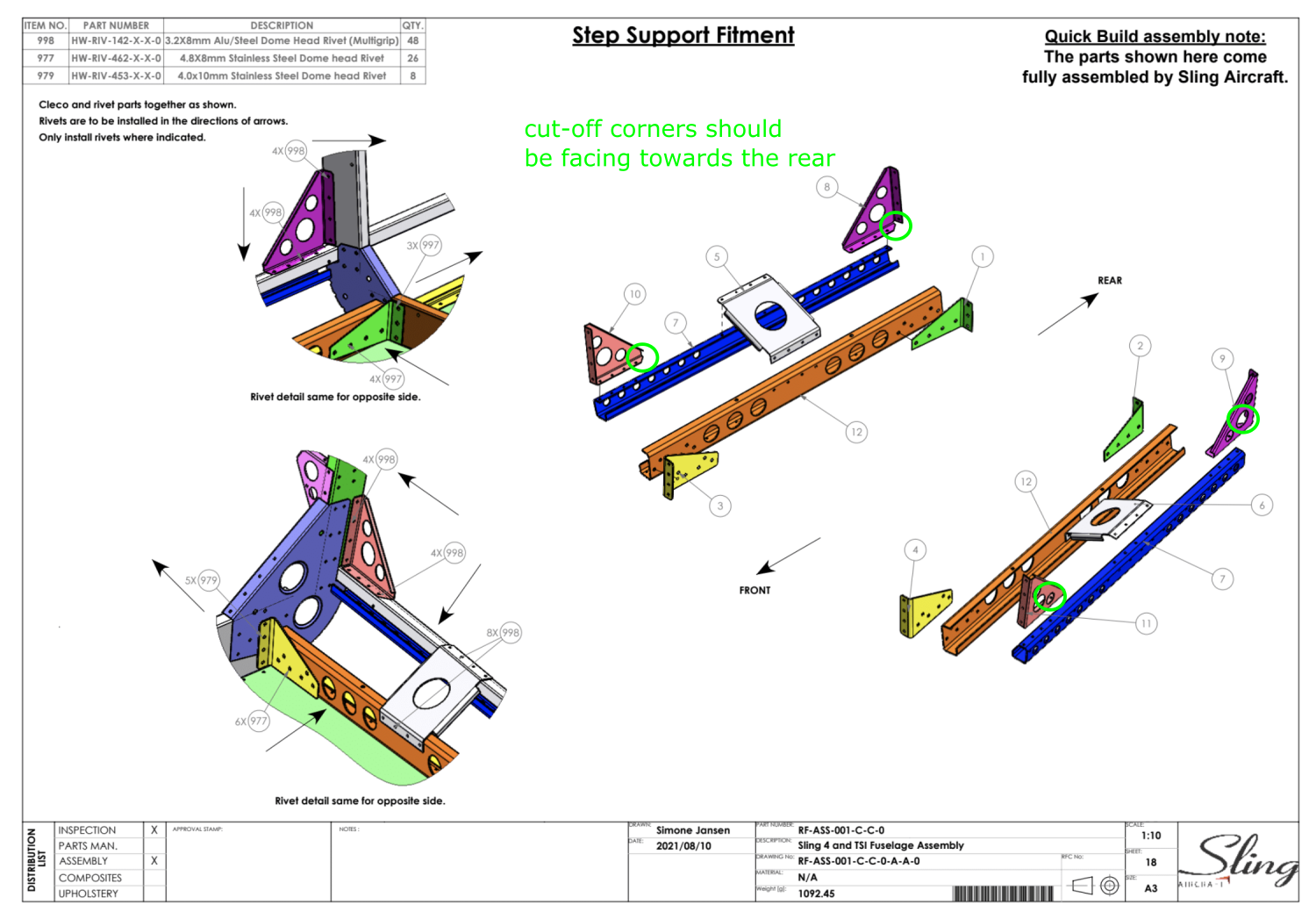 Apparently, the way to keep track of which one goes where is by making sure that the cut-off corner is facing towards the rear of the airplane (as opposed to towards the top, bottom, or front):

During holiday season, we are away from the hangar, but the work does not stop! We keep preparing and deburring parts (with active participation of Zina and Jerry the pug):

In the mean time, Stefania works on putting sound-proofing foam onto the floor and bulkhead:

How about you, dear readers? Where are you spending the holidays and what do you do in the breaks from holiday festivities? Drop a comment below!