These last two weeks, the tank sealing quest continues and we get some nice nomex suits from Sasha’s work as wildfires cast an eerie, blood-orange glow on the Bay Area.

Readers, its definitely scary out here the last few weeks. Here’s a before/after picture from our backyard last week during noon-time.

Thankfully, this week our backyard looks more like the first picture than the second, will keep you all posted on whether that lasts.

We’re trying to find solace in the hangar in the meantime. We’re making slow but steady progress on the wing and fuel tank. Katya has been helping a bunch out these last couple of weeks since she is back from Riverside! Here she is demonstrating the Aircraft Spruce rivet removal tool:

We hadn’t seen a good video on removing rivets and thought it might be helpful!

We decided to prime the parts of the fuel tank that would not be exposed to gasoline/sealant by putting painter’s tape on the rivet holes and priming the rest. Here’s the primed result! 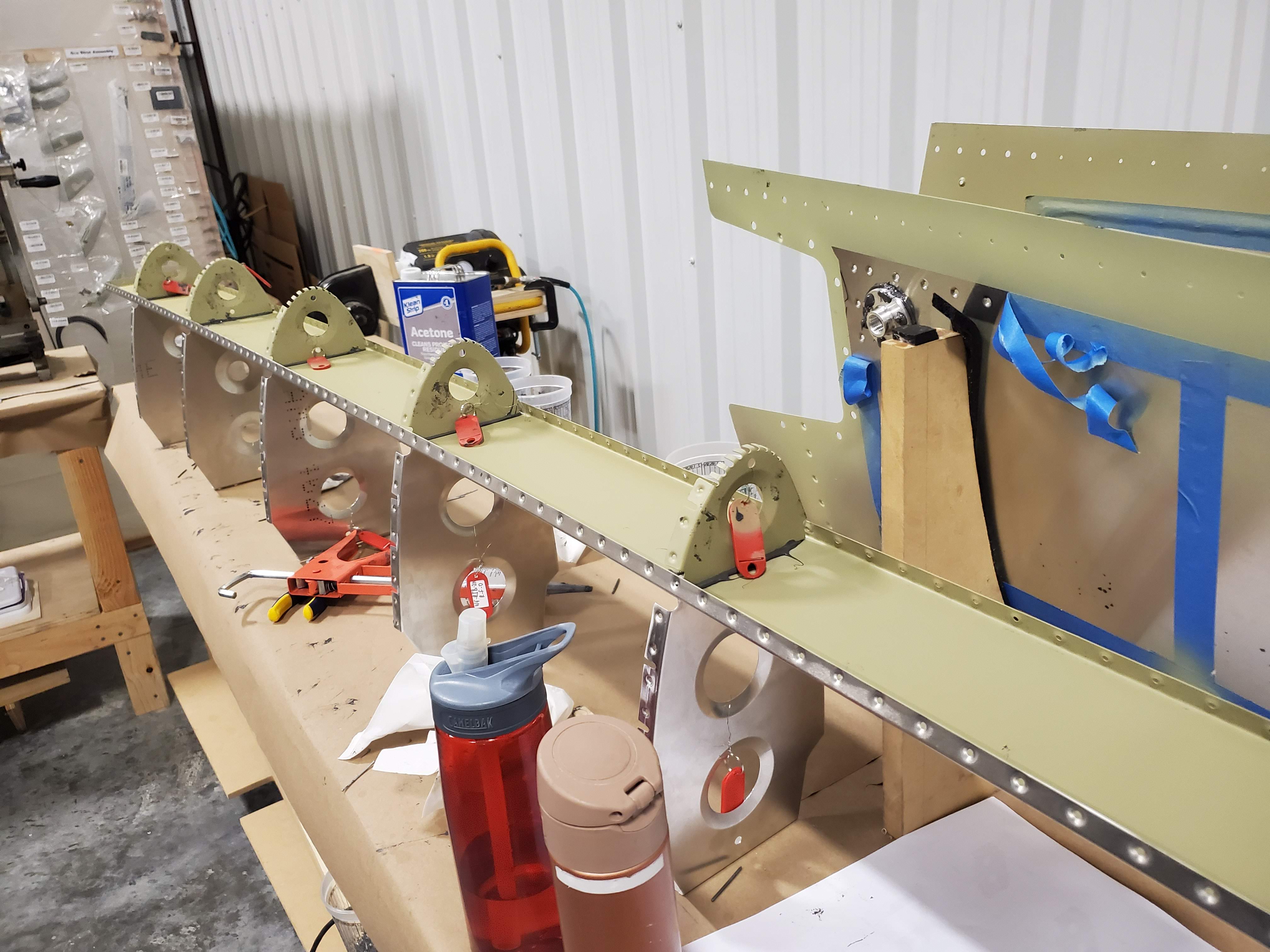 Katya had lots of fun prepping those too… 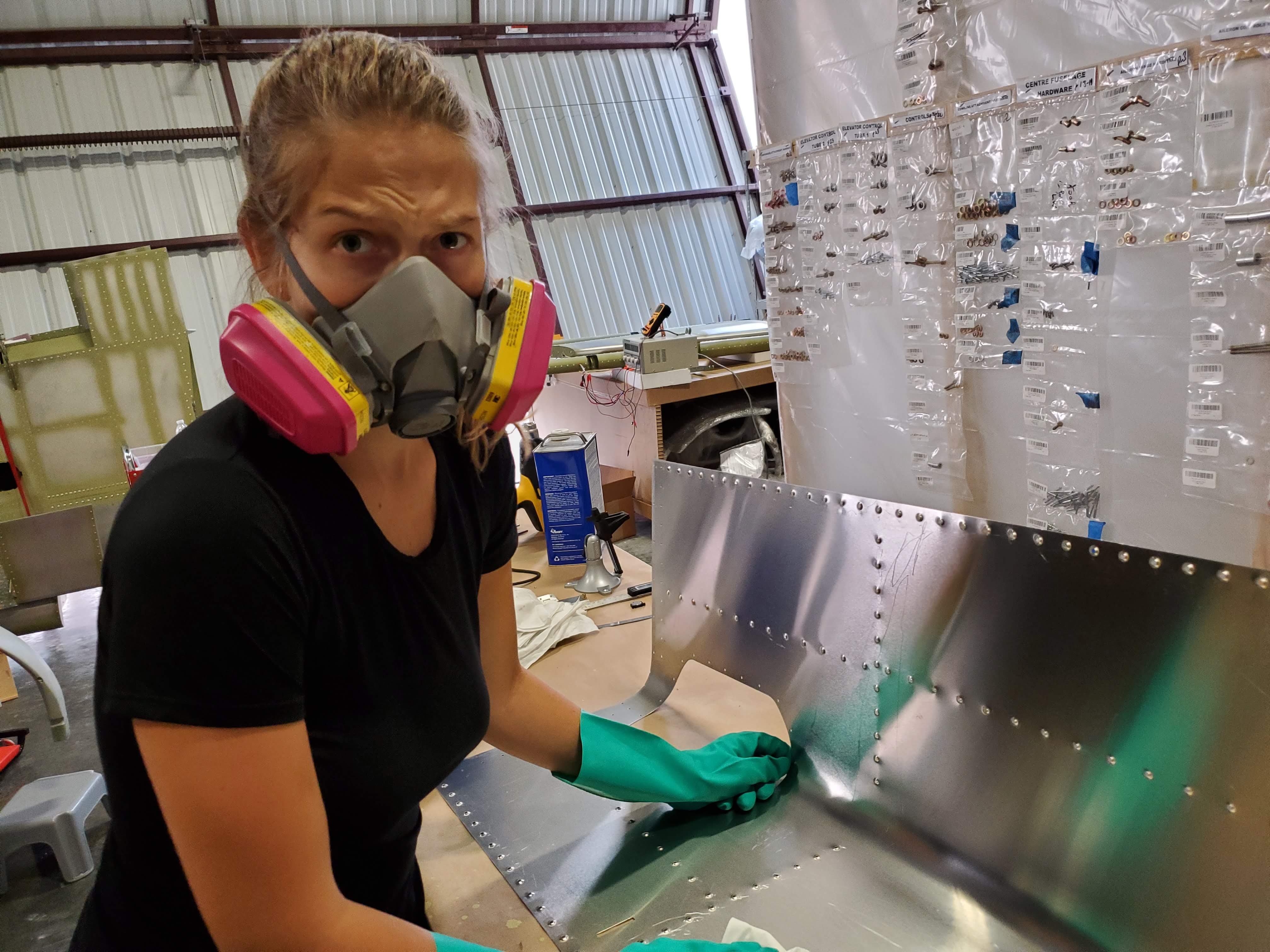 Finally, four of us (Katya, Peter, Jonah, and I) sealed the exterior fuel tank skin to the interior ribs! One thing that I didn’t realize would be an issue is mixing up which rivets go where - with the amount of goop we were using, it was super hard to tell whether we’d even used domed or countersunk rivets in which places or sealed or not sealed. Next time we’ll only wash and work with one kind of rivet at a time (since the channel uses non-sealed rivets on the bottom but sealed ones on the ribs). However, we still felt pretty good when it was over!! Here’s us at 11:30 pm rejoicing :) 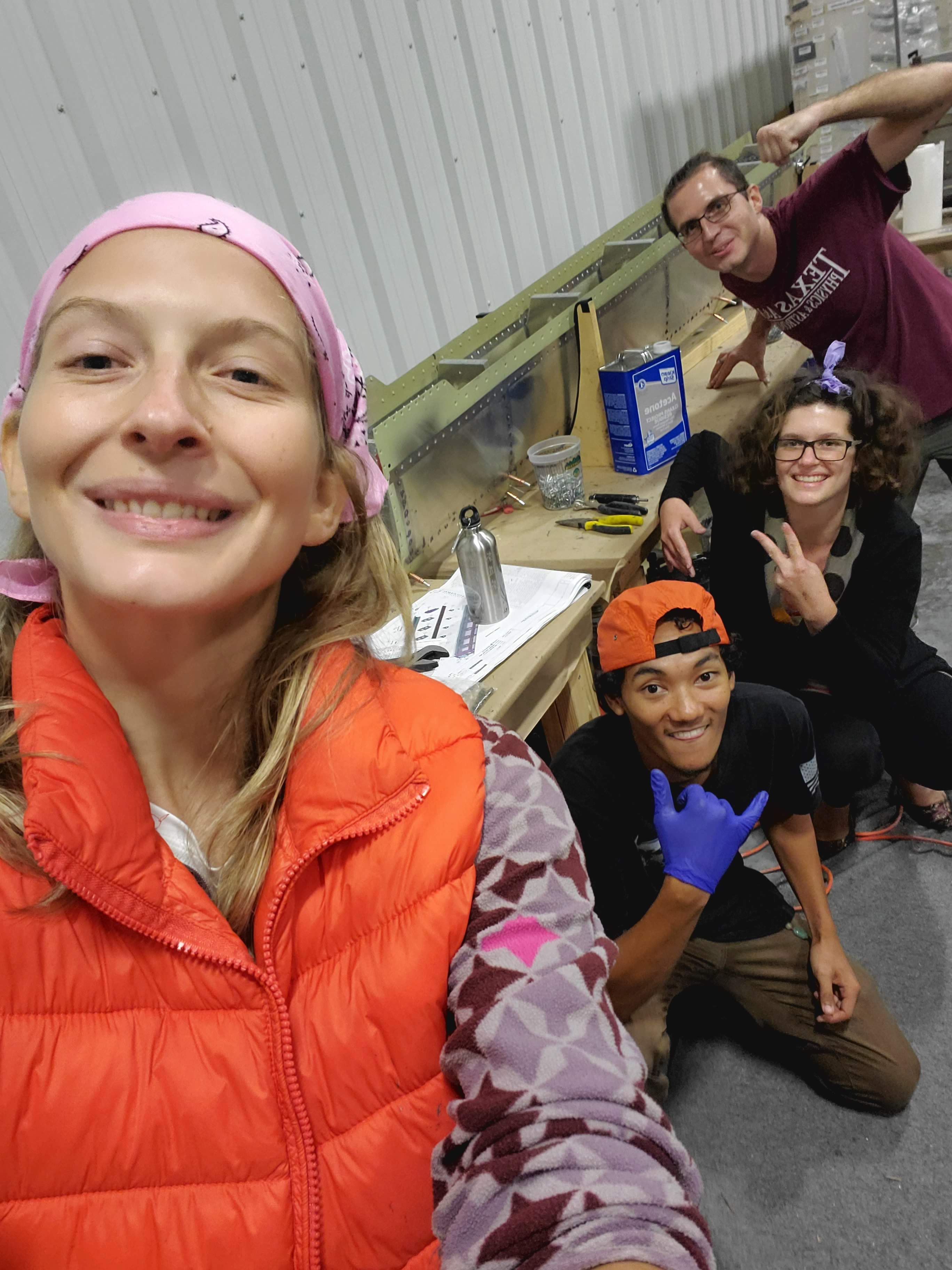 After going through this, we learned about the “Fay technique” described on VAF forums (and documented extensively by Craig Maiman!) where you only seal the mating surfaces and then rivet the rest later - we did not do that, but may try it on the left fuel tank if we find this one has lots of leaks!

At any rate, thanks Katya, Jonah, and, finally, Zina for helping out the last couple of weeks! To round out the story, we also rivetted the bottom of the right wing skin (should have rivetted the step ribs to the spar before rivetting them to the skin, but they came out ok with a lot of effort anyway :)) and did a lot of general clean-up/priming in addition to the above. 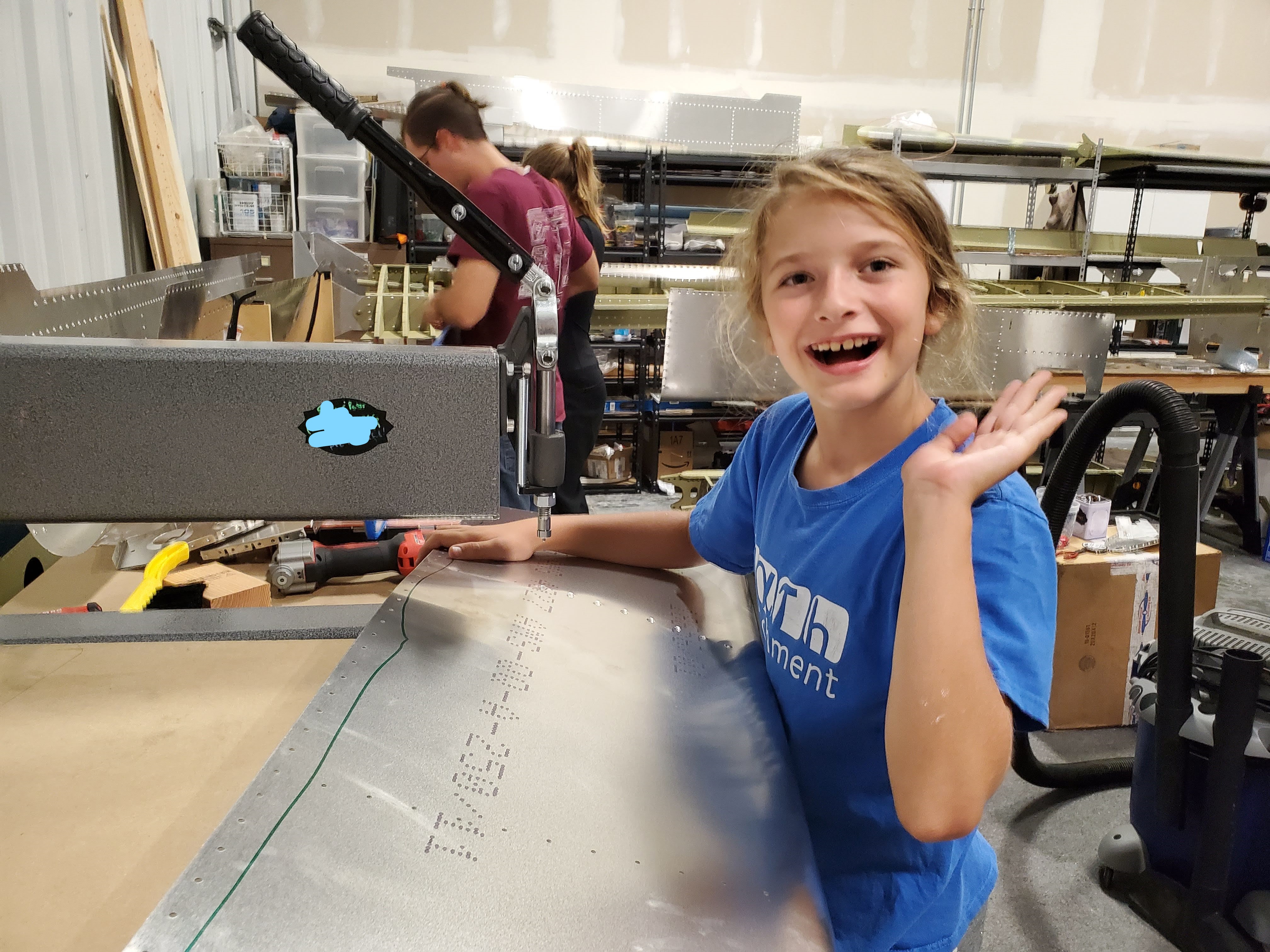 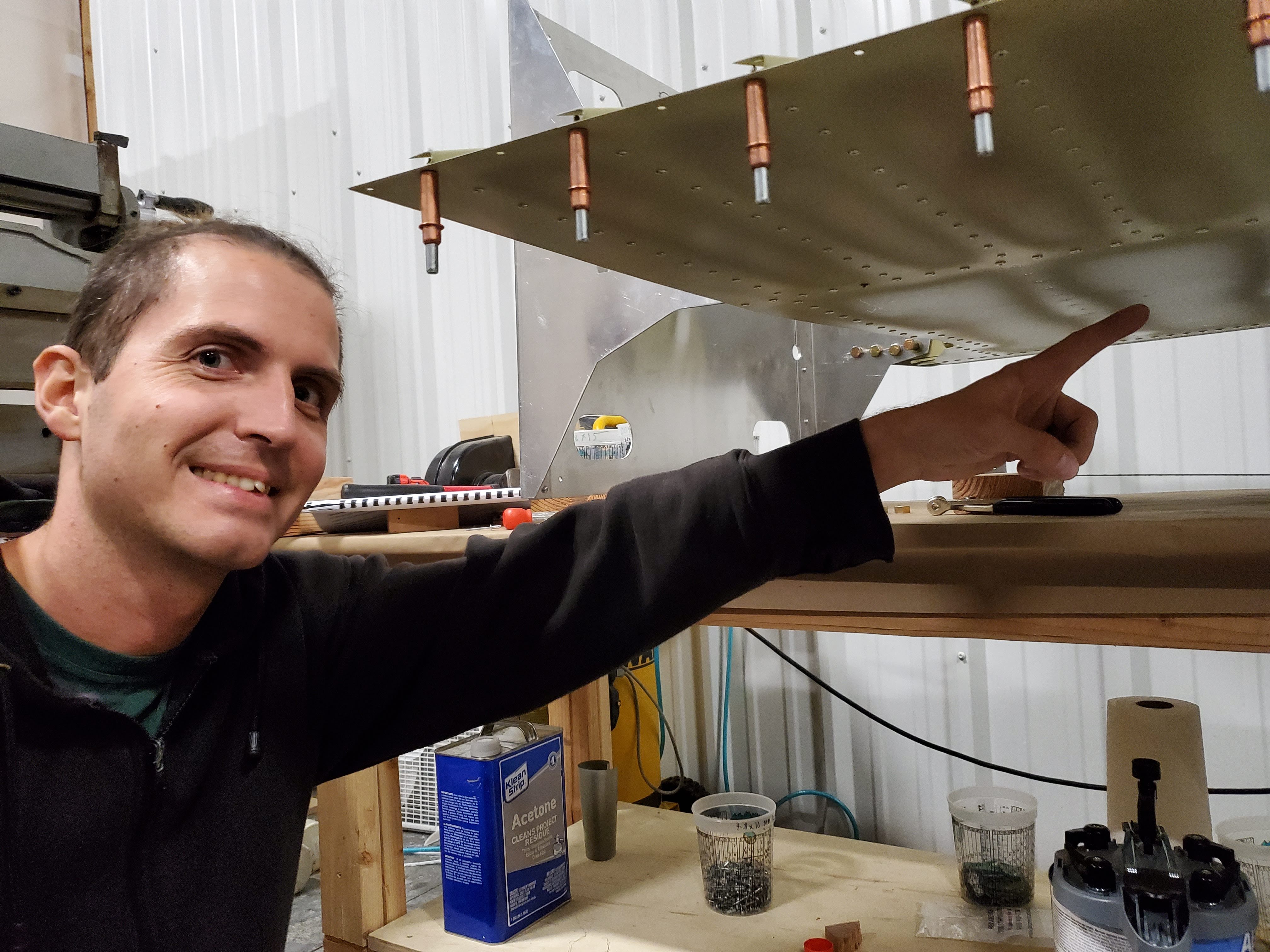 That’s it for this post! How are you doing, gentle readers? Do you too worry that the world is ending? Does this impact your plans to buy/build the Sling? Leave a comment below!